Red dresses in the office window

If you walk by the CBT office at 316 Main Street later this week, you may notice the red dresses hanging in the front window. The simple and elegant dresses are adorned with black silhouetted feathers and bring awareness to the staggering amount of missing or murdered Indigenous women and girls (MMIWG) across Canada, but especially those from our community. 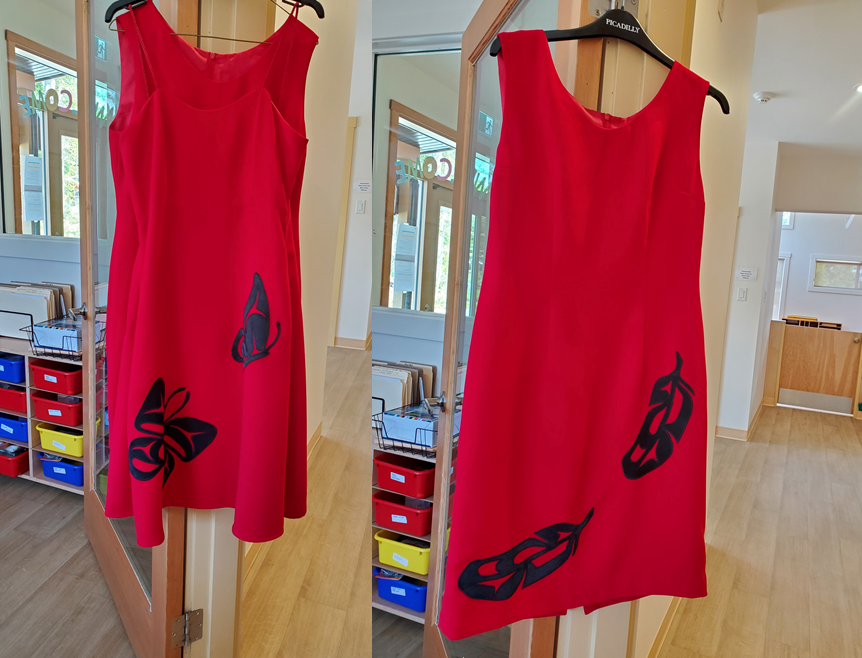 Carol Frank from Tla-o-qui-aht began making the dresses one year ago with support from a CBT Culture Neighbourhood Small Grant, but her community has been remembering and drawing attention to MMIWG far longer. Eighteen years ago today (June 30th, 2002) Carol’s niece Lisa Marie went out to celebrate a friend’s birthday in Nanaimo, where she was living. She never made it home. Carol says, “she was 21 at the time and was just about to move into a new apartment at the beginning of July with a new job.” Carol and other family members were going to drive across the island to help her move. Carol says that the next morning, “we kept trying calling her phone and she just didn’t pick up… that’s when we knew something was wrong.”

So began many years of searches and talking with police. 18 years later, Lisa Marie’s friends, family and community are still looking for answers and closure. As the MMIWG movement gained momentum over the last couple years, Carol began to attend gatherings, noticed the red dresses, and decided to create some in memory of Lisa Marie and the other women who have disappeared from west coast communities over the years. “There are a lot of people here who don’t know that this happens all the time, especially in our community. We want to bring awareness to this issue, especially in the community where Lisa Marie is from.” Carol explains that the red dresses have various meanings. “To some, it is an empty garment of women no longer with us, hung in community to remember loved ones who are missing. Some believe red is the only colour the spirits can see.”

In the years following Lisa Marie’s disappearance, her friends and family began to organize an annual “Walk for Lisa” event every June 30th, but this year it will be just Lisa’s family and close friends due to the pandemic. This year, a new “Lights on for Lisa” initiative has been created: we can leave our porch lights on all night on June 30th to show Lisa, her family, friends, and the RCMP that we have not forgotten her. You can check out the Lights on for Lisa Facebook event here.

While there is increasing amounts of discussion about MMIW in Canada, it is crucial to keep drawing attention to the ongoing gendered and racialized nature of violent crimes against Indigenous women. Just over one year ago, the Final Report of the National Inquiry into Missing and Murdered Indigenous Women and Girls was released. Carol Frank travelled to Quebec to be part of its presentation to Prime Minister Trudeau. The report is comprised of the truths of more than 2,380 family members of thousands of MMIWG (some estimates suggest roughly 4,000 but lack of police documentation is a central theme of the report) and delivers 231 individual Calls for Justice directed at governments, institutions, social service providers, industries and all Canadians.

If you want to learn more about Lisa’s disappearance, you can listen to a podcast about it here:  https://podcasts.apple.com/ca/podcast/where-is-lisa-island-crime-season-1/id1513479877

Over the month of December, the CBT worked alongside 20 local charities to raise funds for our most critical needs. Donors answered the call to stand together to strengthen our communities and ecosystems and together we raised $42,675. These gifts of all sizes will have a collective impact in a region that means so much to us all.

As the social and economic implications of the pandemic continue, community-serving non-profits are struggling to keep up with the increased need for responsive services and programming while facing significantly lower revenues than typical years. The CBT is proud to announce 5 diverse community projects receiving $30K in funding from Round 2 of the Emergency Community Support Fund (ECSF) from the Government of Canada, via the CBT. In total, $70K has been granted from the ECSF. Check out the list of organizations and projects who have received funding here!

We are thrilled to announce the fall round of Neighbourhood Small Grants, a diverse range of inspiring and compassionate project ideas enabling residents to take care of each other while protecting the health and safety of all community members.

We’ve wrapped up our COVID-19 Responsive Neighbourhood Small Grants (R-NSG) and couldn’t be more proud of our west coast communities! The 4 months since we launched the program have been a wild and unpredictable ride, but west coasters have come together to support each other— while maintaining physical distancing— in many inspiring and innovative ways.

This week, Community Foundations of Canada launched a Guidebook and Toolkit to help Canada's 191 Community Foundations—and all the communities they support—find bolder, creative and innovative ways to meet the United Nations Sustainable Development Goals. CBT research director, Laura Loucks, helped author a case study on p. 29 about our organization's dual role as a community foundation and UNESCO Biosphere Region.

On Giving Tuesday Now (May 5th) CBT launched the Community COVID-19 Response Giving Catalogue, a place where west coast registered charities and not-for-profits share current and emerging needs with people who want to help. We are excited to announce that we have met our $30,000 for local organizations!

Through May and June 2020, CBT assisted with the local delivery of the Government of Canada's Emergency Community Support Fund, which provides much-needed assistance to charities and non-profit organizations serving vulnerable populations during COVID-19.

We are excited to announce that the 2020 Biosphere Research Award will help support a large research collaboration to better understand juvenile Chinook salmon survival and growth during their first year of life in the freshwater and marine environments of West Coast Vancouver Island (WCVI).

The R-NSG program has received a strong response from our communities and we're excited to announce the first round of funded projects!

Thank you to our incredible volunteers

It's #NationalVolunteerWeek and we want to lift up the incredible volunteers who propel CBT forward as a community-driven organization.

Neighbourhood Small Grants: a tool to help us respond to COVID-19

What we've learned after our first week of working remotely

How we're staying positive and adapting to COVID-19

Announcing $30K of Funding to Youth-Driven Projects in our Region!

We're so grateful for all the amazing community members who are taking on a Neighbourhood Small Grant project this year This blog post includes a list of all the funded projects, the organizers, the approximate dates, and a summary of the project in the organizers' words. Make sure to check out what events are happening in your neighbourhood!

This summer, Ucluelet Secondary School student Toby Theriault participated in the 2019 Students on Ice Arctic Expedition. Check out her reflections and a short video!

Roberta Tom is a Tla-o-qui-aht community leader who participated in the 2017-2018 Leadership Vancouver Island cohort. Read about her leadership journey here!

Michelle Hall lives in Tofino and is a member of the 2017-2018 Leadership Vancouver Island cohort. Read her reflections about the program here.